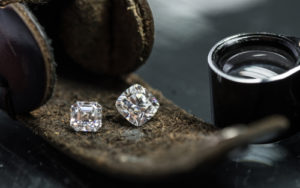 A lot of people simply do not understand what “conflict diamond” means. The term gives the impression that people fought over the gemstones in question, which then became spoils of war. The truth though, is a lot more uncomfortable to stomach, especially for many parties in the global diamond industry: conflict diamonds are not a result of conflicts; rather, they are the cause.

Diamonds are one of the few sure-fire investments in today’s world, so much so that it is hard to go wrong with the purchase of a genuine stone. Anyone with a regular supply would be keen to capitalize, but unfortunately, that includes people who wish to instigate disputes and even all-out civil wars. Africa’s conflicts in the past 50 years can almost completely be traced to illegal diamond trade, and this was only stymied when the US finally came up with a scheme to block trade in conflict diamonds.

When Resolution 1173 was passed demanding an investigation into conflict diamonds, it was found that a fourth of African-originating diamonds ended up funding wars. This is officially at 1% now, but there are organizations that place it nearer 10%. Conflict diamonds are generally sold in the rough, which means they do not go through either cutting or polishing process. After cutting is carried out, these are almost impossible to distinguish based on provenance, and they effectively blend in with the rest of the stones on the market.

The Kimberley Process was created with the aim of investigating and curbing conflict diamond trade. Nations get to sign up, and are then obliged to take necessary measures to end conflict diamond trading which may be happening within their borders. Failing this, the country can lose its membership to the scheme, as well as the right to carry out diamond trade in the global diamond markets.

While “conflict diamond” technically only applies to stones sold by groups that oppose legitimate governments recognized by the UN, this is not a reliable scale to follow. For instance, it has been seen that less stable African governments like that of Zimbabwe, have funded their regimes using illegal diamond trading, while still professing support for the Kimberley Process in public. Government backed trading is not illegal, which means these stones manage to get sold as certified, conflict-free gems. This form of ethical circumvention has long been a problem.