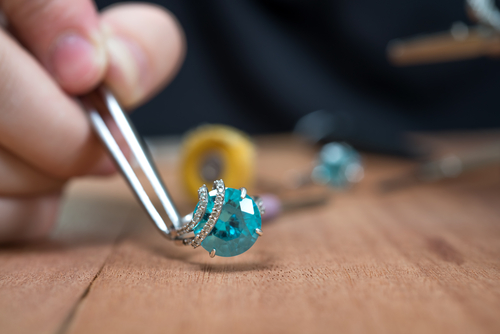 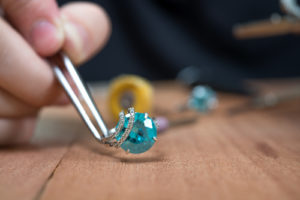 People still get confused about whether fluorescence needs to be considered as a factor to assess the quality of a diamond. Some say that they are the perfect characteristic of high-quality stone, while others have the opinion that fluorescence makes the lower quality diamonds appear much better. However, before that let us discuss what this character is all about.

What Can Be Called as the Fluorescence of a Diamond?

In most simple words, the fluorescence of a diamond is the result of UV (Ultraviolet) rays getting exposed with trace minerals that are confined inside a diamonds. The effect resembles when the same UV light rays are exposed to white teeth making them glow in dark. Often, the same phenomenon can be observed in the daylight, as the sunlight does comprise of UV lights. Well, fluorescence is a term used to describe the visible light emitted by the precious stone when they are flashed to UV light.

How Do the Diamonds Glow and When?

The diamonds that glow in such exposure of UV lights are those which contain any trace of minerals. As mentioned earlier, these gemstones also glow in the broad daylight to a greater extent. Certification is gained by the diamond even after the loose cut diamonds are assessed in a laboratory besides the other tests of the diamond. Fluorescence of diamonds can be very strong, strong, medium, faint or none, as graded as per a scale used.

One needs to remember the fact that different diamonds fluoresce in different colors. These shades can be really varied and surprising, as they shine in green, yellow and even red. Nevertheless, different shades of blue are the most common colors in which numerous diamonds do fluoresce.

The Confusion on Good and Bad Glow

Ever since the concept of fluorescence of diamonds had been discovered as a characteristic to assess the quality of a diamond, this confusion of whether they are actually good or bad is existing. Well, this glowing of these diamonds wholly depends on the diamond certification to a greater extent. However, in most technical aspects considered in the past, the nature of fluorescence was not deemed as the desired attribute to measure the quality of diamonds. Over recent years, this attitude had altered to some extent.

Currently, the visible appearance of a diamond through the effect of fluorescence is more accepted. Moreover, the structural integrity of the diamonds is not composed in the trace minerals. One must not get worried about getting their diamond engagement to shine more than it is really supposed to all because of the presence of these elements of the tiny trace. However, some diamonds do benefit from a certain degree of fluorescence.

Factors That Decide Whether Fluorescence is Good or Bad

Basically, there are two factors to determine if fluorescence of your diamond is really good or bad. Among the two, noting down the color of fluorescence is the first factor to be considered. Under the exposure to UV light, the diamonds with blue fluorescence will appear whiter rather than its true color grade. Meanwhile, the appearance of the different colored fluorescence (like that of yellow) emitting diamond will turn to be less bright and of lower quality.

The second factor to be observed in the diamonds would be of the strength of the fluorescence. Diamonds with a really higher level of fluorescence while in the wrong light will make them look oily and hazy. Eventually, the value of those diamonds will be reduced, as the fluorescence will make them look less good than actual. Often, you might be mistaken for the fact that these phenomena can only take place under the influence of UV ray. However, in reality, it is not so. You will be compelled to consider them if you are wishing your diamond to shine in broad daylight.

Final Decision of Buying a Diamond with Fluorescence

It will totally be a personal choice of what kind of diamond had to be bought, with or without fluorescence. According to a study done by the GIA, it is proved that diamond buyers still go for stones with strong and medium fluorescence. However, some customers do pick out diamonds with higher, though incorrect color grade considering its fluorescence, which makes them pay more. Ultimately, the characteristic of fluorescence must only be deemed as just one among many factors while buying a diamond.